Get maps for your phone!

Crested Butte Mountain Resort quietly started building one of the most progressive bike parks in the state of Colorado about a decade ago. While it started as a relatively small network of trails, Evolution Bike Park is now up to 30+ miles of lift-served downhill and crosscountry mountain bike trails.

While many Bike Parks are known for their huge features and steep, high-consequence downhill trails, that’s not what makes Evolution Bike Park stick out. Instead, it’s the really great progression from easy beginner trails up through those black diamond and double black diamond trails that will make just about anyone think twice before riding them blind.

While the goal of TrailQuest is to ride all of the trails, we thought we’d provide suggested trails for beginners, intermediates, and experts. They have done a nice job of labeling the trails on their trail map with green, blue, and black, but if you’ve got limited time we want you to ride the best ones.

Hotdogger is a long, swoopy, bermed trail perfect for kiddos and beginner mountain bikers. It goes back and forth along under the lift and we’ve seen people of all ages and all skill levels have a blast on Hotdogger. It’s a great place to start and is often the first mentioned when you ask about what trail beginners should start on. It may also get you more TrailQuest miles than almost any other trail on the mountain since it loses grade so slowly!

That being said, Awakening is our favorite green trail on the mountain. Access it by riding Primer off the top of the Red Lady lift and then connect it to Awakening. It’s a wide, machine-groomed trail with beautiful, big berms. When I first started mountain biking at the Bike Park, I could lap Awakening over and over and not get bored.

Some of these trails really, really shine. Teaser is like the grown-up version of Awakening. It still has the big machine-built berms and turns through the aspen trees, but this version has jumps to go with the berms. A relatively new trail, this one quickly became a locals’ favorite.

Frequency and Luge are another couple of favorites on the blue trails list that both take off basically from the top of the Red Lady Lift. Frequency has brief, short steep sections where you descend quickly and then carry that speed into steep uphills with little jumps at the top. It’s good fun whether you carry enough speed to catch air on the jumps or not. Luge got a slight re-route a few summers ago and rides much better now. If you’re an intermediate rider, put these two trails on your list.

Although it’s not a trail, we have to include the skills park right at the top of the Red Lady Lift. If you’re trying to master bigger stepdowns or even jumping your bike, there is a nice progression of three drops that allows you to practice riding bigger obstacles. It also has a few other neat features so you can warm up before hitting the trail and trying your skills in the “real world.”

Even the expert trails showcase a wide variety of characteristics. We advise riding these with a buddy and not going full send on your first time down.

Avery offers more of an old-school classic downhill track with a wooden bridge to kick things off leading into some challenging rock gardens, a tricky section with some huge stepdowns and roots in the trees, then a big drop with a nearly-as-challenging sneak around the side of it. Then it feeds into Avery or Boulder Mason for the bottom part of the trail, each of which offer challenging rock moves.

Crusader is a less-ridden trail that takes off from the Ten Peaks zone near the top of Painter Boy Lift. It’s more rugged and a little overgrown, and super fun with lots of jumps and some wooden bridges throughout. In the same zone, you can hit the Woods Trail with jumps and wooden features. Near the bottom you’ll encounter two big wooden berms/wall-rides and then a series of jumps. You will have to ride Gothic Road back to the base area from Woods Trail.

Psycho Rocks and Captain Jack are our two current double black diamond trails and they definitely earn that rating. Riding up the Red Lady lift, a little over halfway up if you look down you’ll see a pile of boulders with some wooden and mesh bridges going down it. That’s just one of many features on Psycho Rocks. Captain Jack, named for the woman who owned the Black Queen Mine, does not play around. Starting off with a few large wooden jumps, it then turns into a fast and furious descent through trees with plenty of features to keep you on your toes.

There are several multi-use trails at Evolution Bike Park. Some of them are best ridden up (for those who don’t want to buy a lift ticket or for riding after-hours or in the early mornings). Others offer good descents as well.

Up And Away is an uphill-only bike trail you can use to connect to Columbine and climb up from there all the way to the top of the Red Lady via Painter Boy and then Primer. This is the preferred way to access to trails off the top if you’re not going to ride the lifts.

Meander may beat Hotdogger as the longest trail on the mountain. It takes you along the edge of the Butte with gorgeous views of the East River Valley below. We prefer this one in the uphill direction, but plenty of people like to ride it down.

Westside, on the other hand, is good either up or down. We love it for testing bikes at Outerbike: climb Westside from the base area, connect with Happy Hour, ride that to Upper Loop, and then back up to the base. It gets you some up, some down, and has enough features and variety to give you a good feel for the different bikes.

If you’re in from out of town and want to knock out an entire trail area in a weekend, Evolution Bike Park may be the easiest trail area to snag if you’re willing to pay for lift tickets. You’ll still be tired, of course, as descending does take a lot of effort. It’s more like doing a bunch of squats than running a marathon though.

If you’re not looking to bang out a whole trail area in a weekend, the Twilight rides on Wednesday and Friday afternoons offer great low-cost lift tickets, but can also be a little crowded. Afternoons also mean thunderstorms in July and August so there may be lift closures.

The best hack might just be to get tickets for Outerbike Mt. Crested Butte. A three-day full demo pass will get you access to all of the best new bikes to try, three days of lift tickets for the Bike Park, lunches for three days, beer for two afternoons, and some sweet swag.

Scared of Captain Jack and Psycho Rocks? Best plan there may be to wait until the Bike Park is closed for the season in October and go hike the trails on foot. Even that is scary to think about though! 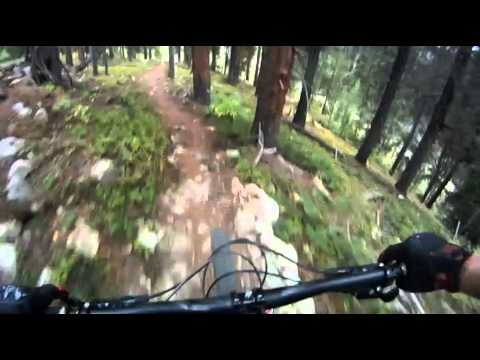 SURF TOWN IN THE MTNS

THE HOME OF MTN BIKING